Kelly Brook was almost sick at the VIP opening of Hyde Park's Winter Wonderland in London yesterday (20.11.14) after boarding several rollercoasters and gorging on schnitzels. 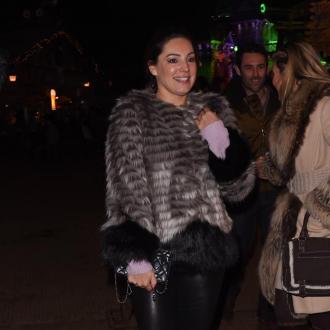 The 34-year-old model attended the VIP launch of the annual festive fair in Hyde Park, and admitted to feeling worse for wear after seeking her thrills by whizzing around on several rides.

Writing a caption on her Instagram account, she confessed: ''I'm pale after the Rides and JetLag and paparazzi Sensory Overload #WinterWonderland (sic).''

The brunette beauty has been busy filming comedy pilot 'One Big Happy' - which also stars Elisha Cuthbert - in Los Angeles since breaking up with on/off boyfriend and former fiancé David McIntosh, but flew back to Britain on Thursday for the launch of the festive season.

Thankfully, Kelly's nausea wasn't too severe, as the 'Piranha 3D' actress appeared to enjoy plenty of Christmas treats, such as schnitzels with a group of friends including celebrity make-up artist Gary Cockerill.

The stunning star - who will celebrate her 35th birthday on Sunday (23.11.14) - also seemed to be over her 'Gladiators' ex, as she was spotted strolling lovingly through the German market with a mystery male companion.

A huge difference from the weather in sunny California, Kelly opted to wrap up warm for the chilly British temperatures, donning an oversized fluffy coat and smart leather trousers for the occasion.