Kelly Brook Stripping in Paris as She Will Perform with Le Crazy Horse Cabaret Company. 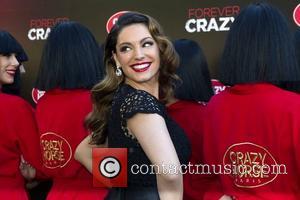 Picture: Kelly Brook attends a photocall for 'Crazy Horse', announcing that she will take part in the cabaret show for one week only, starting on...

Over recent years, two things have captured our heart and soul. Firstly, cabaret; making its way into the main stream, most notably in the 2001 film 'Moulin Rouge' as its strident vehicle, cabaret has become a shining light of femininity, allowing women to feel good about being dead sexy, without being tarnished with the 'slut' brush. The other of our two loves is Kelly Brook. She's forever endearing and even though she makes some bad choices (we're thinking of Piranha 3D here), choosing to join the cast of the iconic Crazy Horse Cabaret in Paris is certainly one of her better decisions.

Crazy Horse Cabaret has been in business for over 60 years and it's had an exclusive list of guest performers, including lady-cabaret, Dita Von Teese, and Pamela Anderson. Now, Kelly Brook is set to add to that list of sex-icons of the 21st century.

Brook has been a Crazy Horse fan for years, as she told the Independent: "After seeing the show in Paris a few years ago, I have dreamed of becoming a Crazy Horse dancer. The costumes, lighting and choreography make it the best cabaret in the world.” Now, it seems her dream is set to come true. She'll be playing Miss Bissou throughout the show as well as performing her own segment, called "Lecon d'Erotisme" (which translates into English as the Lesson of Eroticism).

This isn't the first take she's got naked for a crowd on stage, she also performed in a version of The Calender Girls, in which she did precisely that. The Mirror reports that Brook is “very excited” about the prospect of doing it all again. This will all be part of Crazy Horses' new show 'Forever Crazy' in which she'll perform for one week only, from 1st-8th November this year.