Kelly Clarkson Brings Out The Stars At Los Angeles Gig 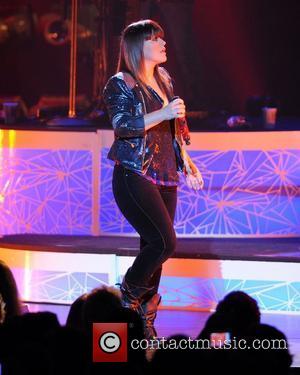 Kelly Clarkson's Tuesday night (03Apr12) gig in Los Angeles was a star-studded affair - the singer invited pals Reba McEntire, Blake Shelton, Michelle Branch and Tamyra Gray up onstage to belt out duets with her.
Shelton stood in for Jason Aldean on Clarkson's acclaimed country duet Don't You Wanna Stay, while Reba joined her for Because of You, and fellow American Idol star Gray hit the stage for a stirring rendition of the Whitney Houston/Mariah Carey Disney duet When You Believe.
Even Clarkson was a little overcome by the star power at the Nokia Theatre. She joked, "I feel so popular right now..." and later added, "It's L.A., y'all... I got a lot of friends here."
As well as her own hits, Clarkson also thrilled fans with covers of Florence + the MAChine's Heavy in Your Arms and Britney Spears' Till the World Ends.