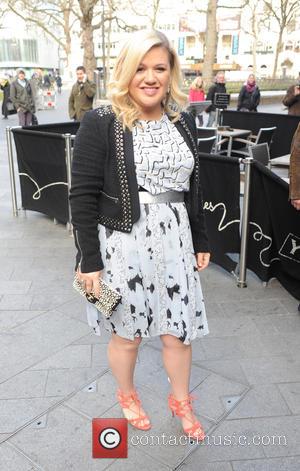 Kelly Clarkson has brushed off harsh comments from a British columnist who called the pop star a "chunky monkey" after a recent appearance on U.K. Tv.

The Since U Been Gone hitmaker paid a visit to The Graham Norton Show on Friday (27Feb15), and after seeing the singer on screen, controversial writer Katie Hopkins took to Twitter.com to criticise Clarkson's fuller figure.

Hopkins wrote, "Jesus, what happened to Kelly Clarkson? Did she eat all of her backing singers? Happily I have wide-screen."

When her followers pointed out that Clarkson gave birth to a daughter eight months ago, the British columnist added, "Look chubsters, Kelly Clarkson had a baby a year ago. That is no longer baby weight. That is carrot cake weight. Get over yourselves... She is now a chunky monkey... You're supporting Kelly Clarkson because everybody likes to have a fat friend, because the great thing about a fat friend is that it makes you feel slimmer. Every fat child has a fat parent and, that to me is why Kelly Clarkson is an important example, and she needs to allow her daughter to grow up knowing it's not great to be fat, it's much better to be healthier."

Clarkson was asked about Hopkins' comments in an interview with Britain's Heat magazine, and the singer insisted she does not let nasty remarks upset her, saying, "She doesn't know me. I'm awesome! It doesn't bother me. It's a free world. Say what you will. I've just never cared what people think. It's more if I'm happy and I'm confident and feeling good, that's always been my thing. And more so now, since having a family - I don't seek out any other acceptance."

This isn't the first time Hopkins has taken aim at an overweight celebrity - she previously singled out fellow Brit Lily Allen, calling her "hideous" after piling on pounds and suggesting she is only famous because of her father, British actor and comedian Keith Allen.