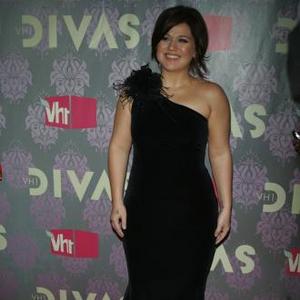 The 'Stronger (What Doesn't Kill You)' hitmaker - who shot to fame after winning the inaugural season of the pop star search show in 2002 - believes the country singer would make a great addition to the panel following the departures of Jennifer Lopez and Stephen Tyler.

Kelly thinks Carrie - who was the winner of the fourth series of 'American Idol' in 2005 - would be a fantastic choice because of her educational background and poker face.

When asked if Carrie would make a good judge, Kelly said: ''She would! Didn't she major in journalism or something?

Carrie, 29, graduated from Northeastern State University in Tahlequah, Oklahoma, in 2006 with a bachelor's degree in mass communication and she specialized in journalism.

However, Kelly, 30, insists she has no interest in joining Randy Jackson on the panel on the FOX show that made her famous.

But the musician would love to be part of 'American Idol' if she could be a mentor to the acts.

She told Us Weekly magazine: ''I don't want to be a judge. Mentor is more my style. And not just mentoring, getting to be a part of the song with them, getting them amped up - from our rehearsals to stage, it's so exciting being on stage. It's fun!''

Since J.Lo and Stephen announced their departures after just one series, several major names have been linked to the judging spots, including Mariah Carey, Charlie Sheen, Miley Cyrus and Adam Lambert - who finished as runner-up on the 2009 series, losing to KRIS ALLEN.