Kelly Clarkson Has Jokingly Threatened To Fire Her Nanny If She Carries Out Her Plans To "Treat" The Singer's Daughter River Rose To A Screening Of Mum's 2003 Film Flop From Justin To Kelly. 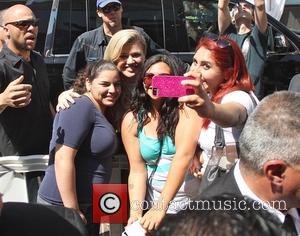 Picture: American pop star Kelly Clarkson was snapped as she posed for a few selfies with her fans at The Grove in Hollywood, Los Angeles, California,...

The Since U Been Gone star reluctantly made the film with fellow American Idol finalist Justin Guarini shortly after she won the first season the TV talent show over a decade ago and she recently discovered the woman she hired to help look after her 11-month-old fan is a huge fan.

Clarkson tells Rolling Stone magazine, "She was like, 'My roommate and I used to watch it all the time! I'm totally going to show your daughter From Justin to Kelly'. I'm like, 'I will fire you'."