Kelly Clarkson reportedly adores her post-pregnancy body and has no plans to go on any kind of diet regime. 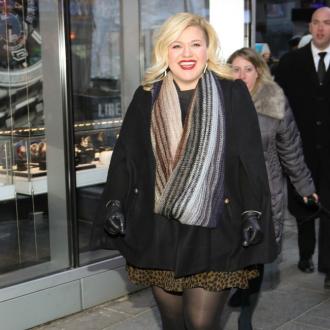 The 'Heartbeat Song' hitmaker - who has eight-month-old daughter River Rose - was recently criticised for her weight by British TV personality Katie Hopkins but reportedly doesn't care what anyone thinks of her body and has no plans to go on a diet.

A source said: ''Kelly loves the way she looks. Kelly doesn't want to be a twig, and her recent weight gain hasn't affected her career. She's still getting endorsement deals and putting out songs.''

But friends believe the 32-year-old beauty is putting on a brave face.

The insider said: ''Kelly says none of the fat talk bothers her, but it does to a certain degree. She feels she needs to stay tough for her fan base and for girls who are blasted for being bigger than a size zero. But deep down, of course, all the ridicule affects her.''

She said: ''In the beginning [of my career] if it wasn't one thing, it was another. Like finally I was at the perfect weight that people loved - I happened to be doing kickboxing at the time - and that still wasn't enough. I'm never going to live up to anyone's expectations, so why try?

''I've always had good confidence. If somebody says, 'I don't like something about you,' I'm just like, 'You know what? I've been hurt so incredibly deeper than what you're saying, and I survived. So I'm good.' You can't count on your self-worth being tied to someone else.''