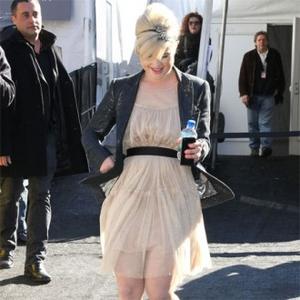 Kelly Osbourne was reduced to tears after seeing an image of her brother's baby.

The 'Fashion Police' host was overwhelmed with "joy" after Jack's fiancee Lisa Stelly had a 3-D scan, showing the couple's unborn child in incredible detail, and took to twitter to express her pride.

She wrote: "OH MY GOD! i just saw a 3d sonogram pic of my brothers baby i cant stop The Tears of joy the baby looks perfect! #ProudAuntie (sic)"

Jack - whose parents are Ozzy and Sharon Osbourne - revealed last month that Lisa was expecting their first child and admitted he can't wait to become a dad.

He said: "My life is absolutely insane right now. I'm about to be a father. I'm excited. I'm a little nervous, but I'm excited. It's going to be fun."

Meanwhile, Kelly is throwing her friend Miley Cyrus a 19th birthday party which she promises will be the "sickest thing" ever.

The 'Fashion Police' star is planning a big Celebration for the 'Can't Be Tamed' singer - whose birthday is today (23.11.11) - because she deserves it for how hard she has worked in her career.

Kelly told E!: "It's intimate, but it's going to be the sickest thing she's ever seen in her life. Although I see her on the same level mentally as me, I also realise that Miley's 19 and she deserves to still have fun.

"Because that girl has so much pressure on her and has worked her ass off her entire life that I think a lot of the time people forget that she deserves to have fun too. So that was my mission for her, to make her birthday the best day ever. I've got all sorts of Madness and craziness planned."