Kelly Osbourne has revealed her pet bulldog Willy saved her life while they were out on a walk in Beverly Hills today (21.03.14) when he pulled her away from being hit by a car. 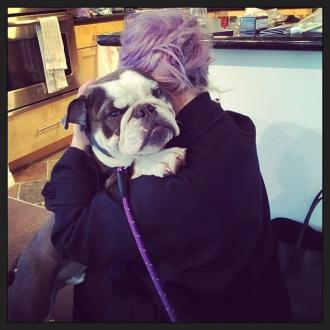 The 29-year-old star - who lives in Beverly Hills, California - made the most of the weather today (21.03.14) as she took her bulldog Willy for a walk in the sunshine, but the stroll could have ended in tragedy if it wasn't for her beloved pet pooch pulling her back and stopping her from being hit by the oncoming vehicle.

Writing on Twitter, she revealed: #MyDogJustSavedMyLife we just went for a walk and I fell because Willy pulled me back from getting hit by a car!!!! Then he jumped on top of me to protect me! #WhatAHero! (sic).''

The 'Fashion Police' presenter - who is the daughter of Sharon and Ozzy Osbourne - added a link to a photo of her Willy on her Instagram account where she's seen giving her animal rescuer a well deserved hug back in the safety of her home.

Kelly - who split from her fiancé Matthew Mosshart earlier this year - recently sold her one bedroom cottage in the Hollywood Hills for $1.3 million, despite the fact she's reportedly been renting it out for the impressive sum of $4,600 a month since moving into a three bedroom house in Beverly Hills in 2011.

The purple-haired beauty is now said to be on the lookout for a new property.