Kelly Osbourne has second round of tattoo removal

Kelly Osbourne is undergoing her second round of tattoo removal to erase a synthesiser design on her right forearm today (06.12.13). 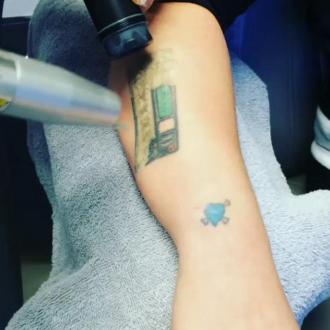 Kelly Osbourne is having her second round of tattoo removal today (06.12.13).

The TV host is undergoing a painful procedure to have the design of a synthesiser and a blue heart removed form her right forearm via laser treatment.

She tweeted: ''Sitting in the Doctors office covered in numbing cream and seran wrap ready for round 2 of tattoo removal!''

Kelly's collection of 15 inkings include angel wings on her back with ''Je Vous Aime la Maman'' - which translates from French as ''I love my mother'' - on her back, a star on the back of her neck, a padlock and key tattooed on her left forearm with the word ''Daddy'' and a skull and crossbones design on each foot.

Ahead of her first laser treatment, she wrote: ''Not looking forward to this afternoon ... I'm getting my first tattoo removal! Its going to burn like the snap of 1000 rubber bands!

In 2010, the reality star revealed she was going to get rid of most of her body art when she had the time because she feels many of the tattoos were a mistake.

Kelly said at the time: ''Some still have a special meaning, like the matching ones my brother Jack and I have of each other's names, but now I feel like some were a mistake.''