Kelly Osbourne has advised fans to ''think'' before getting tattoos after undergoing her third round of ''horrendously painful'' removal treatment. 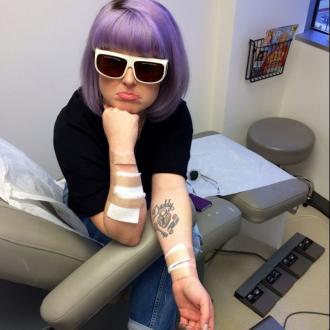 The 'Fashion Police' host has had several of her 15 inkings removed and, after undergoing another bout of laser treatment on Tuesday (11.03.14) to take off some of the artwork on her arms, she has advised fans to ''think'' before committing to something so permanent.

She wrote on her blog: ''As humans we fill our conscience with clichés to selfishly justify the ridiculous things we do in life... Such as getting stupid tattoos.

''I have now undergone my third laser tattoo removal. All day I have found myself saying 'no pain no gain' or 'pain is beauty!' however the bigger lesson I have taken away from this horrendously painful experience is THINK BEFORE YOU INK!...

''Furthermore think before you make ANY permanent decision because its ok to change your mind before its too late!(sic)''

Kelly underwent two tattoo removal sessions last year but they had been a long time coming as she admitted back in 2010 she wanted to get rid of her body art.

Kelly said at the time: ''Some still have a special meaning, like the matching ones my brother Jack and I have of each other's names, but now I feel like some were a mistake.''