The revelation comes in Osbourne’s upcoming book, ‘There Is No F**king Secret’.

Kelly Osbourne has revealed that her father Ozzy took an overdose of pills after learning that his wife Sharon had suffered a seizure during her cancer treatments.

In her upcoming book There Is No F**cking Secret: Letters From A Badass Bitch, Kelly writes that Ozzy ended up being rushed to hospital in the same ambulance as his wife, after downing a handful of pills and washing them down with vodka. In an extract from the book published by Page Six, Kelly writes that her mother had suffered a seizure and needed to go to the hospital. When she ran to tell Ozzy what had happened: “Dad was there in his boxers, and I watched him scoop his hands into a bowl of pills, swallow a handful of something, and then wash it down with vodka.”

Later in the ambulance Ozzy, “leaned over to put his hand out to see if mum was breathing. Then he passed out with his hand over her mouth . . . The EMTs tried to pull him off, and Dad, not knowing where he was or what he was doing, started to resist out of habit."

“They pulled over the ambulance and started to call the police.” Kelly adds that she begged the EMTs not to call the police and they agreed, but she had to zip-tie Ozzy’s hands to a bar so they could restrain him.

When they arrived at the hospital, Sharon was placed in one room and Ozzy was rushed to another for treatment of a drug overdose and alcohol poisoning. “Dad could not handle the thought of losing mum,” Kelly writes.

The 32-year-old adds that her father had a doctor come to the house and “shoot him up with whatever he wanted while the [doctor’s] son sat in our dining room and played video games.”

In the book Kelly also recalls late comic Robin Williams visiting Sharon when she was “losing her cancer fight” and helping save her life. Williams, she says: “Climbed into bed with her . . . He stayed there all afternoon, and throughout the house, you could hear her cackling with laughter.

“Shortly after he left, she told us that she’d decided to go back and finish chemo," Kelly adds. "Robin Williams helped save mum’s life.” There Is No F**cking Secret: Letters From A Bad*ss Bitch, hits bookstores on April 25. 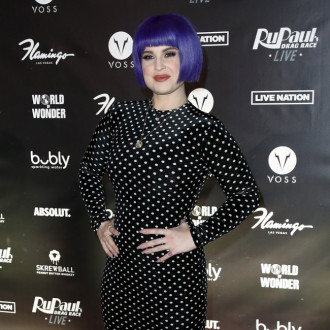