Kelly Osbourne Shows Off New Head Tattoo: "Sorry Mum And Dad But I Love It"

The 29 year-old TV personality paid a visit to the famous Shamrock Social Club in Hollywood on Saturday night (June 28th) to get the new body ink. 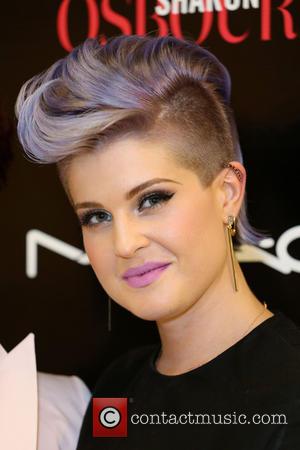 Kelly Osbourne recently got a new tattoo, but it is on the side of her head.

The 29 year-old recently shaved both sides of her lilac-coloured locks and has shocked her fans once again with her latest body art addition.

On Saturday night (June 28th) Kelly took to social media to show off the tat, which simply reads "stories" in bright purple ink.

In the first of several snaps posted on Instagram, the TV personality wrote, "First female member of the #ShamrockCrew thank you @Dr_woo_ssc for head tattoo," which refers to the Shamrock Social Club in Hollywood.

Kelly captioned another pic, which features the finished artwork with the tattooist, "Thank you dr_woo_ssc it's magic what you can do! shamrocksocialclub."

Despite the obvious pain she would have felt from getting her head tattooed, the daughter of rock legend Ozzy Osbourne was very pleased with it as she later wrote on Twitter, "Sorry mum and dad but I love it!"

Kelly is no stranger to getting her body inked, she previously a recognisable keyboard one her arm, before getting it removed in November 2013.

"I was miserable and I just went and got all these tattoos and I don't know why. One of them is a keyboard and I don't even know how to play a piano!" she said on the U.K's 'This Morning' in 2009.

Meanwhile, the former reality TV star, who separated from fiancé Matthew Mosshart in January, is reportedly embarking on a romance with Puff Daddy's 23-year-old stepson Quincy Combs, according to Us Weekly.

More: Kelly Osbourne's mum taught her to be a 'fighter'

"Kelly is single, but she's having a lot of fun. She's been hooking up with Quincy, her really good friend lately," the source told the mag. "It's not serious but he's really hot and he's very into her!"

Will he approve of the new tattoo?