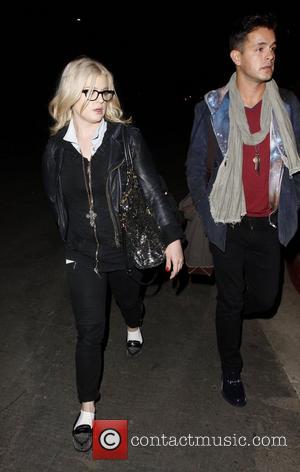 Picture: Kelly Osbourne and a friend arriving at The Hollywood Bowl to watch Incubus in concert Los Angeles, California, USA - 07.10.11

Kelly Osbourne has continued her long running feud with Christina Aguilera, branding the singer "fat". The 30-year-old songstress shocked fans at the recent Michael Jackson tribute at Cardiff's Millennium Stadium, debuting a new fuller figure.
Speaking as a correspondent on Friday's edition of E!'s 'Fashion Police'show, Osbourne slammed the singer's stocky figure, saying, "She called me fat for years.I was never that fat". Co-host Joan Rivers backed up Kelly with a few choice remarks of her own, saying, "Lady Marmalade got into the peanut butter again". However, third host George Kotsiopoulous moved to defend the singer, claiming it was her outfit that proved the most unflattering, saying, "I'm looking at this and thinking, Well, she's put on weight. This just isn't flattering.But this is just a crappy outfit, regardless. No matter what shape your body is in, it's just bad". The debate intensified when George claimed Aguilera was "still probably a size 2/4", to which Osbourne quickly disagreed, saying, "Trust me, I'm a 2/4.That is not a 2/4". Last month on the show Kelly proclaimed, "She (Aguilera) called me fat for so many f*cking years.so you know what? F*k you! You're fat too".
Despite causing a stir with her fuller figure, Aguilera was warmly received at the Michael Jackson concert following her rendition of 'Dirty Diana' and 'Smile'.