Kelly Osbourne was left in tears after her dog Sidney pooed all over her dad Ozzy Osbourne's sofa and rug. 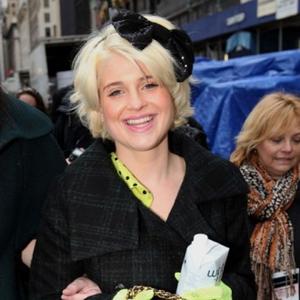 Kelly Osbourne's dog ruined her dad's rug by pooing on it.

The 25-year-old star - who recently split from her model fiance LUKE WORRALL - has been living at her parents' apartment with her pet pooch Sidney while she waits to move into a new property.

Although things were going well in the house, Kelly awoke one morning to discover the mucky mutt had defecated all over her dad Ozzy's expensive rug and sofa.

She told George Lopez during an appearance on his talk show 'Lopez Tonight': "I'm staying at their apartment with my dog Sidney and it's like the best apartment building ever, it's got everything there. For the past three or four days I've been like, 'Sid you're doing so good you haven't been s****ing anywhere you're finally trained, I'm so proud of you.' But on Sunday morning I walk into my dad's TV room to watch TV and he had s**t all on the sofa and the rug - all over it! I was crying and I called up my mum and was like, 'Mum the dog's pooed everywhere!' Then my friend called me and was like, 'Oh, this is the last thing you need right now.' That just set me off and was cutting s**t out of a faux fur rug for two hours. It was horrible."

Kelly - whose mother is 'America's Got Talent' judge Sharon Osbourne - had to leave her own home in Los Angeles because she has been hounded by the paparazzi since separating from Luke.

The blonde beauty is now waiting to move into a new apartment which has security to keep photographers out.

She said: "I moved into mum and dad's apartment because a lot of people keep trying to take pictures of me in my house which is against the law and I don't understand it. They broke my gate - my gate doesn't close all the way now - and my parents don't think I'm safe because I live alone now. I'm staying at their place until I get a place in a security building."