Actress-turned-tv Personality Kelly Ripa Is Nursing A Broken Foot After Injuring Herself In A Dance Class. 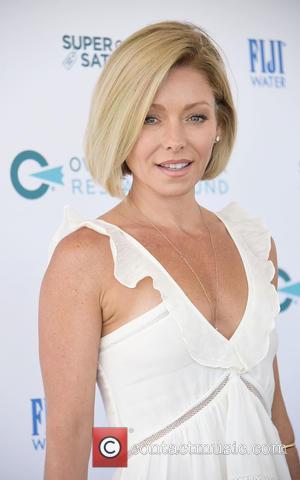 The Live! with Kelly and Michael host suffered the injury on Wednesday (29Jul15), when she fell over a weight while performing a jump.

She says, "Somebody had left a weight on the floor... and I did a jump and I landed on the weight and my foot went over and under the weight and it sounded like bubble wrap. My girlfriend... was in class with me... and I said to her, 'Can you open the door...?' I crawled out and I really did not feel well at all, I felt really queasy, shocked..."

The 44 year old was taken to the Hospital for Special Surgery in New York City and was thrilled when doctors told her she did not require surgery.

She continues, "We took an X-ray and a CT scan and we found out I have four little bones that broke off and (the doctor) said, 'The good news is, it's in a way that doesn't require surgery...'"

Ripa has to wear a brace on her foot for the next six weeks.