The photo depicts Ripa and her now-husband during their quickie ceremony in Vegas. 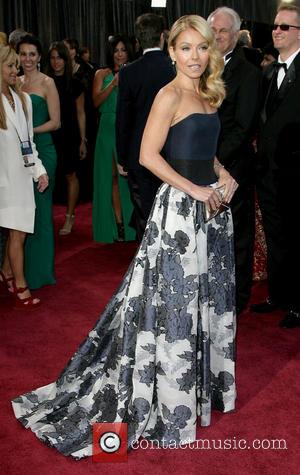 You wouldn’t expect a Kelly Ripa 1996 photo of all things to go viral. But that’s exactly what happened with Ripa’s wedding photo, when the star of “Live with Kelly and Michael” posted it to her Twitter feed earlier today (May 3rd). The picture shows Ripa and actor Mark Consuelos, also 42, during their wedding ceremony 17 years ago, Yahoo! OMG! reports. In the photo, both look pretty casual - Ripa is wearing a white spaghetti strap dress, while her husband sports a black blazer. It makes sense, considering that the couple had the ultimate quickie marriage – a Vegas ceremony, complete with cheap flowers and everything.

But in the photo, the two are gazing lovingly into each other’s eyes – a sign of good things to come. Unlike a lot of celebrity marriages, theirs has lasted through the years – almost two decades of them. Ripa and Consuelos are still together and have three children. It’s far from a Kim Kardashian-style 72-hour-long marriage. In fact, Ripa and Consuelos are right up there with some of Hollywood’s longest lasting couples, including Denzel Washington & Paulette Washington, Tom Hanks & Rita Wilson, Michael J. Fox & Tracy Pollan, Kyra Sedgwick & Kevin Bacon, Warren Beatty & Annette Bening, Jada Pinkett Smith and Will Smith among others. Ripa is certainly dressing a lot better these days, but the photo is still a precious memory.