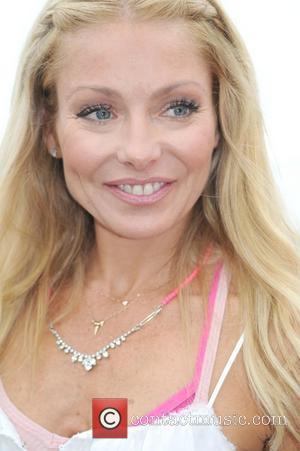 Revealing one of television's worst-kept secrets, Kelly Ripa today introduced the person who will replace Regis Philbin as her co-host on Live!. As Michael Strahan stepped on stage to the cheers of the audience, Ripa greeted him with hugs and kisses -- and balloons. Strahan remarked, "You know how you say it's a dream come true, but I truly can't say that because I didn't know I could even dream this." Ripa seemed to cast doubt on that claim a few minutes later when she played a clip of a 2008 show when Strahan, then a member of the New York Giants, remarked during a guest appearance on the show said that he would one day like to host Live! -- to which Philbin commented, "You never know who's going to sit here next." Reacting to the clip, Strahan turned toward the camera and said, "Regis, I was joking ... but I'm glad the joke came true."