Cara Delevingne says Kendall Jenner is her favourite member of the Kardashian family. 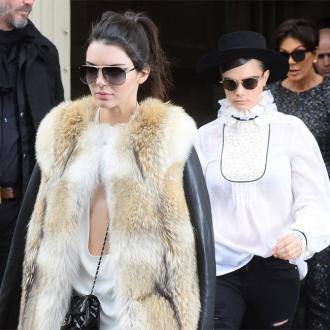 The British model is friends with a number of the famous sisters - including Kim Kardashian West, Khloe Kardashian, Kourtney Kardashian and Kylie Jenner - and their mother Kris Jenner, but is particularly close to her fellow model.

Asked her favourite Kardashian by 'Entertainment Tonight', she said: ''Oh I can't do that. I mean, Kendall... but I love the whole family, I can't really pick one.''

Cara, 22, has previously joked she considers herself a member of the family.

Posting a picture of herself with Kendall and Khloe on Instagram, she previously wrote: ''I am Cara with a K now hehehe! #KARA (sic)''

And sharing a photo of her own, Khloe previously wrote:

Cara grew close to the Kardashian family following the death of her beloved grandmother.

A source said in February: ''Her grandmother died last month, which has been particularly tough for her - not least because she hadn't been home much in the weeks leading up to it.

''Kendall picked up on all of that - she's good at reading people - and went out of her way to introduce her to the whole Kardashian family. Of course, with Cara's natural charisma, they loved her from the word go, and they're very protective of her.