Kendall Jenner and Cara Delevingne ''couldn't keep a straight face'' during their first shoot together for fashion bible Love magazine. 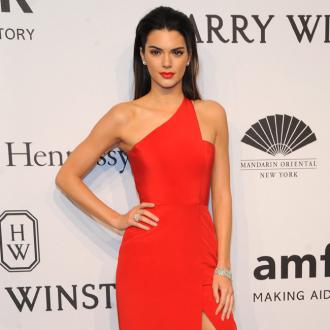 According to Kendall, 19, the model duo - who star in the latest edition of the fashion bible - collapsed into fits of giggles as they posed for the publication during their first photo shoot together, which was overseen by editor Katie Grand.

Kendall said: ''Actually, this specific shoot was the first shoot Cara and I did - like, this was the first time we ever really hung out. And we, like immediately - Katie knows!- we were just laughing the entire time!

''We couldn't even keep a straight face. She was like, 'Alright, let's calm down! No more laughing!'''

While the in demand 'Keeping Up With The Kardashians' star has been kept on her toes over New York Fashion Week, gracing the catwalk for Alexander Wang and Diane Von Furstenberg , she confessed it was ''awesome'' to sit back and watch her younger sister Kylie make her modelling debut last week.

The 17-year-old beauty - who took to the catwalk during their brother-in-law, Kanye West's show for his new Yeezy Boost collection for Adidas Originals on Thursday (12.02.15) - stunned in one of the line's iconic bodysuits and was supported by Kendall, her mother Kris Jenner, and half sisters Kim Kardashian West and Khloe Kardashian.

Speaking at a signing for Love magazine at Bookmarc in New York, Kendall told Style.com: ''It was awesome. I think she did very well, and his line was amazing, and it was really cool.''