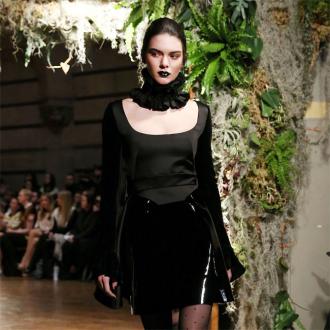 The 'Keeping Up With the Kardashians' star, Gigi, 19, and the Victoria's Secret beauty hit the catwalk for Balmain's hotly anticipated A/W 2015 show in the French capital yesterday (05.03.15).

The trio showed off the Parisian label's metallic collection sporting stunning black and gold, and black and purple creations, each with their hair swept to one side.

Rounding off the star line up for the show was Alessandra's fellow VS angel Adriana Lima, as well as British beauty Jourdan Dunn, Joan Smalls and former angel Karlie Kloss, who announced she had ended her team up with the underwear giant last month.

Supporting Kendall, 19, at the event was her half sister Kim Kardashian West, who arrived at the show with her husband, rapper Kanye West, and debuted her new platinum blonde hair do.

Jared Leto was also spotted at the venue with a new hair style in a similar hue to the reality TV star's.

Meanwhile, Kendall recently thanked doctors for helping her to recover from a mystery illness in time for Paris Fashion Week.

The brunette beauty - who starred in a total of eight shows at New York Fashion Week last month before walking for Giles in London and Fendi in Milan - revealed she hadn't been feeling well after strutting her stuff for the Italian label and took to her Twitter account to thank the medical experts who treated her.

She wrote: ''thank you to all the Drs. for getting me better so I can go to Paris now and continue fashion month. sad I had to miss the rest of Milan. (sic)''