Kendall Jenner bared all as she walked for Chanel at Paris Fashion Week yesterday (27.01.15), taking to the runway braless in a sheer shirt from the label's Haute Couture Spring/Summer 2015. 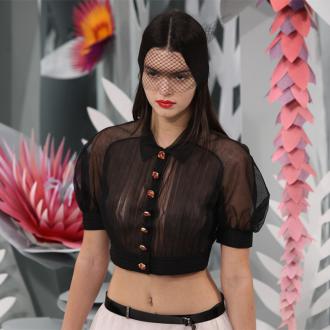 Kendall Jenner ditched her bra to walk for Chanel at Paris Fashion Week.

The 19-year-old model turned heads as she headed down the catwalk in a sheer black shirt and voluminous skirt from the label's Haute Couture Spring/Summer 2015 collection, baring her midriff and breasts as she strutted through the extravagant floral-inspired set at the Grand Palais.

The brunette beauty - who has a long-standing professional relationship with Chanel's creative director, Karl Lagerfeld - was supported at the show by her mother Kris Jenner, who risked upstaging her model daughter in a pair of the label's see-through trousers.

Kendall's sister, Khloe Kardashian - who was absent from the hotly anticipated event - took to Twitter to share her thoughts on the show and confessed she was ''so proud'' of her younger sibling and mum, Kris, 57.

She wrote: ''Kendall looked stunning at the Chanel runway show in Paris!!! My mama killed it as usual!!! So proud... (sic)''