Kendall Jenner was reportedly seen leaving a star studded bash in Ibiza holding hands with Justin Bieber after flirting with him all night. 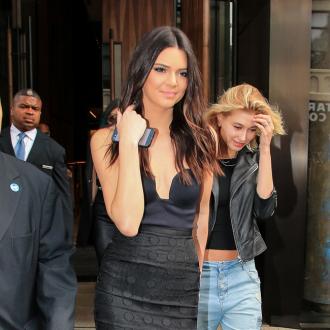 The 'Keeping Up with the Kardashians' star - who is the half sister of Kim, Khloe and Kourtney Kardashian - was spotted leaving the 40th birthday party of Givenchy fashion legend Riccardo Tisco in Ibiza with the 'Baby' hitmaker.

A source revealed: ''Kendall and Justin were inseparable for most of the night. Justin has always been good friends with the Kardashians, so he and Kendall go way back.

''There have been rumours about them dating before and it was even suggested that Kendall played a part in his break-up with Selena Gomez.''

Justin, 20 - who was partying with stars including Kate Moss, P Diddy, Jared Leto and Kanye West at the bash - is said to have had his eyes on the 18-year-old model all night.

The source told The Sun on Sunday newspaper: ''As soon as Justin arrived he made a beeline for Kendall the moment he spotted her.

''They were seriously flirting and kept going in and out of a photobooth together. There was lots of laughing and teasing and they were taking endless selfies.

''After partying for about two hours they quietly slipped out of the party together and were seen holding hands.''

Earlier in the night Justin had posted an image of himself with his arms around Kendall's mum Kris Jenner's waist and teased her and her 16-year-old sister Kylie with the caption.

He wrote: ''@kendalljenner @kyliejenner who's your daddy (sic).''

Meanwhile, the controversial star is also reported to have hooked up with Playboy Playmate Alyssa Acre and Victoria's Secret model Shanina Shaik during his holiday on the Spanish island, while Kendall has previously been linked with One Direction hunk Harry Styles.