Kendall Jenner was queen of the waves in St Barts yesterday (20.08.15) using a jet-board to jump and dive into the Caribbean waters. 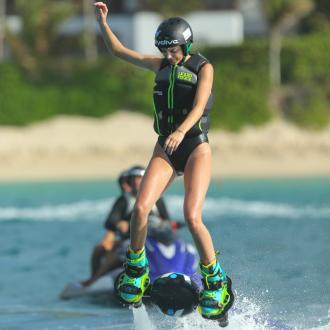 The 19-year-old beauty was holidaying with her family on the Caribbean Island of St Barts when she was spotted wearing a helmet and life jacket whilst jumping and balancing above the water on a 'Back to the Future' style water-craft.

The jet-board uses a stream of propulsion to drive the rider through air and water and Jenner appeared to have mastered the art as she sped off from her friends and family.

The Chanel model was joined by her 18-year-old sister Kylie Jenner and the teen's boyfriend Tyga, 25, however pregnant Kim Kardashian West stayed cooped up inside the yacht.

The 34-year-old 'Keeping Up With the Kardashians' star documented the day on social media site Instagram but complained of being ''bored'' whilst her younger sisters had all the fun.

However, Kim dragged Kylie away for a few minutes to take a few sultry pictures, with one captioned ''Ky x Kiki''.

She added: ''Bored selfie on the boat because I can't jet pack or jet ski.''

Kim, who is six months pregnant with her and husband Kanye West's second child, later explored the sights of St Barts with her two-year-old daughter North.