Kendall Jenner is rumoured to have been dating her high school sweetheart, Julian Brooks, in secret for a year. 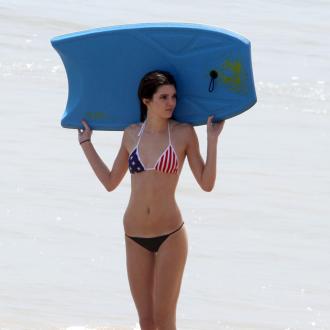 Kendall Jenner is rumoured to be dating her high school sweetheart.

Kendall, 17, met Julian Brooks - who is now a student at the University of Nevada - when they were at Sierra Canyon School together and the pair have reportedly been dating for a year.

The pair have been keeping their romance low key, but were spotted hanging out at Bruce Jenner's house in Malibu, California, on the weekend of July 4.

An insider told Star magazine: ''They are each other's first loves.''

Over that weekend Bruce was surrounded by his family, teaching his girls, Kendall and Kylie, how to surf at the private beach behind his Broad Beach Bluff home in Malibu - where he is staying to give himself space from his wife Kris.

Jaden Smith, 14, who is rumoured to be dating Kylie, 15, was also spotted celebrating Independence Day with the Jenners.

Kylie and Jaden - son of Will Smith and Jada Pinkett - have been linked for some time, and were spotted holding hands on a trip to watch 'World War Z' at the Calabasas Commons movie theatre last week.