Kendall Jenner visited Michael Jackson's house when she was a child and was stunned when she came face-to-face with the late pop superstar. 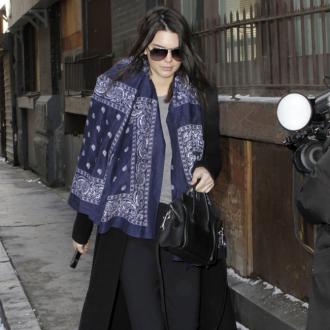 Kendall Jenner visited Michael Jackson's house when she was a child.

The 19-year-old model was stunned when she came face-to-face with the late singer - who died of acute Propofol intoxication in 2009 - during one trip to his Neverland ranch in California.

She recalled: ''I remember going, actually, and as I was leaving, Michael Jackson was coming in. And I was like, 'Oh, my God! That was Michael Jackson!' ''

Kendall has appeared on her family reality show 'Keeping Up with the Kardashians' since she was just 10 years old but she and her younger sister Kylie, now 17, had no ''say'' in being on the programme and she is unsure whether she would agree to being filmed by cameras if she had an option.

She said: ''Me and my little sister were placed in. Like, 'OK, there's gonna be a TV show around.' We didn't have a say. And how could we have a say? It was in our home. There was no way we couldn't be on it.

''Now if someone was like, 'Do you...?' Honestly, I can't answer that question. I have no idea. I don't remember. I was 10 years old when the TV show started. I don't remember what it was like before.''

Kendall is unsure what life would be like without the show but she doesn't think things would be ''worse''.

She added in an interview with the new issue of America's GQ magazine: ''It's actually really hard for me to think of. But that day will come, and it'll be fine.

''I don't think it would be worse. Everything that happens is still going to happen, just minus the cameras.''