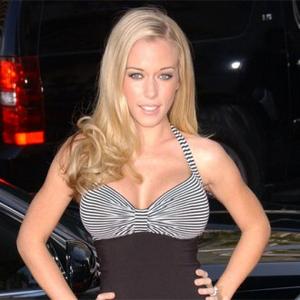 Kendra Wilkinson isn't ready to have another baby.

The former Playboy model and her husband Hank Baskett already have 22-month-old son Hank Jr. together but they are going to delay expanding their family until it feels like the "natural" thing for them to do.

Hank is currently without an NFL team after being released by the Minnesota Vikings in March and the 26-year-old sex symbol has revealed her fans will see her spouse's sporting tribulations in the new series her E! reality show 'Kendra'.

She exclusively told BANG Showbiz: "Hank doesn't have a job right now so I could say we have found our way in our relationship but right now we are kind of lost when it comes to work for him. People are going to get a chance to see what real people go through and what we have to go through and what are we going to do next with Hank and his career. Hank played football and that is a well-paid sport but now he is out of a job right now so it's like, 'What is next? What is he going to do to match up that money?'

"And we don't know but we are taking you through the Journey with us. The thing about it is it's very inspiring because Hank went to college for four years and he graduated and so he is going to use his degree to do something."

Kendra - who previously lived with Playboy mogul Hugh Hefner - insists if she does get pregnant in the future she will have no problem letting the cameras film her and the delivery as she insists child birth is a wonderful thing and should be on television.