Review of In A Perfect World Album by Keri Hilson

Review of Keri Hilson's album In A Perfect World 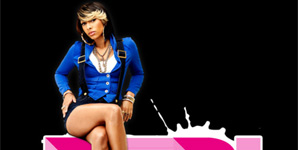 Upcoming American r'n'b sensation Keri Hilson releases her eagerly awaited debut album 'In A Perfect World' jointly released on Timbaland's and Polow Da Don's labels Mosley Music Group and Zone 4. Both Timbaland and Polow have produced Keri's debut and will be laughing all the way to the bank with this exceptional talent and fantastic album. Indeed Hilson has been groomed in all the right places having established herself as a credible writer writing for the likes of Usher, Ciara and Britney Spears as well as appearing in popular music videos. She's been nominated at music awards for best upcoming act and will undeniably be receiving many awards after this release.

Keri Hilson is stunning! She's a true beauty and she's got a fantastic voice too. 'Make Love' really showed that to me on this debut. You don't hear so much genuine serenity and heartfelt vocal emotion unless you're a real soul queen. 'Make Love' takes me back to that great soul in the same vein as Mary J Blige. 'Hurts Me' is equally brilliant. It's more of a pop track but it works in a sophisticated way to create soul, passion and sensitivity to hit you right in your heart. Wow!

'In A Perfect World' is a fantastic album. Tracks that have been released like 'Energy', 'Turning Me On' feat Lil Wayne, 'Knock You Down' feat Kanye West and Ne-Yo and 'The Way You Are' have all had great success and are rightly chart bangers. Yet there's more to this album than commercial success, there's real soul and depth of lyrics and emotion. It's modern and yet respects the classic artists like Donny Hathaway. 'Slow Dance' co-written by Justin Timberlake is another example of the respect Keri Hilson has in the r'n'b world. With so many respected featured artists and the best producers in this field working on this album is proof to me of her talent but just listen to 'In A Perfect World' and see for yourself.

This is a great debut! There are all sorts of shades here for old and young to appreciate but you can't deny she's sensational. Everything about Keri Hilson exemplifies class and sophistication. Her beauty, serenity, delivery and lyrics show genuine diva quality 'In A Perfect World' with the help of Timbaland shows a desire to experiment and push things forward. For me it was great to feel that genuine soul I've felt missing from a lot of r'n'b for some time. If you haven't been interested in listening to Keri Hilson due to the singles released being commercially appealing I wouldn't miss out on this album.its class!