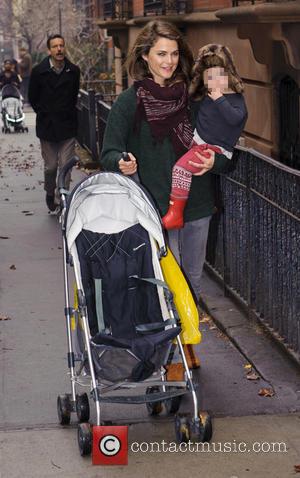 Picture: Keri Russell and Willa Deary - Keri Russell carries her daughter Willa as she returns home, only days after the Brooklyn Heights townhouse was burgled...

Actress Keri Russell has sparked rumours of a new romance with her Tv co-star Matthew Rhys following her recent split from her husband of seven years.

The Austenland star's publicist confirmed Russell's marriage to Shane Deary was over earlier this month (Dec13), revealing they had been living separately since "early summer" (13).

Now it appears Russell has already moved on - she was spotted enjoying some Christmas shopping with Rhys around her Brooklyn, New York neighbourhood in the run up to the holidays, and reports suggest they are more than just friends.

An eyewitness tells People.com, "They looked very much like a couple. They were laughing and walking closely together."

The pair was also seen sharing a romantic lunch at ABC Kitchen in Manhattan, with another source telling the New York Post's Page Six column, "Seeing the way they are together I could have sworn they were a couple. They were so touchy-feely, drinking and laughing."

Representatives for both celebrities have yet to comment on the report.