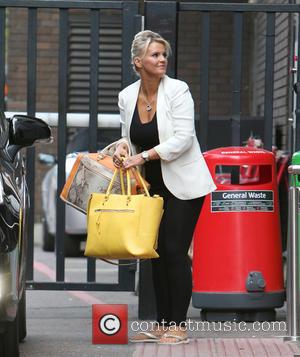 The fiance of British pop singer Kerry Katona was detained under the Mental Health Act by police officers on Wednesday (30Jul14) after having a meltdown in a street.

The Atomic Kitten singer cried as her husband-to-be George Kay was restrained by cops for screaming out in distress in a road outside the couple's home in Oxfordshire, England.

Onlookers tell British newspaper The Sun that Kay was locked out of the property and began yelling, "Kerry, Kerry, they're going to kill me. They are hitting me with the hammer. Why are you letting them do this?"

Katona watched in tears at the door of her home as police officers, who had been called by witnesses, handcuffed Kay. He was taken to the nearby John Radcliffe Hospital, where he was examined and discharged later that night.

A spokesperson for Thames Valley Police says Kay was not tested for substance abuse and no further action will be taken.

Katona and Kay have been engaged since last year (13) and they welcomed their first child together in April (14).