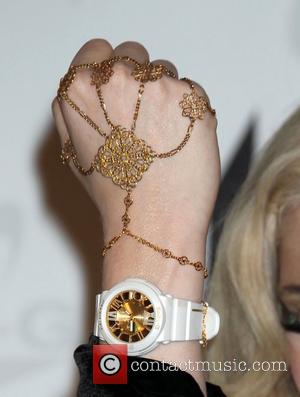 Kesha has finally unveiled the video for her new single ‘Die Young’ and it certainly doesn’t disappoint.

Not if you’re a fan of Ke$ha, at least. And especially not if you’re a fan of the thought of Ke$ha in a skimpy black leather bikini. In the video, Ke$ha plays a cult leader and emerges from a hearse at the start of the movie. What follows is a series of ritualistic scenes as she dances in front of a pentagram, interspersed with ‘80s style disco graphics (you know… the usual combination…) and some raunchy dance routines. As the chorus kicks in, the raunch factor pretty much sky rockets through the roof. This one should definitely come with a parental advisory label, folks.

By the end of the video there are shots of her writhing around wearing a very small white bikini. “That magic in your pants is making me blush,” in one of her more inspired poetic moments. Well, you’re not the only one blushing here, Ke$ha, that’s for sure. The song itself debuted back in September and has already been selling – it made the top ten in Australia already and peaked at number four in the US.

We’re not sure exactly why it took so long for the video release to come around; presumably she was trying to stop blushing before they could get the filming wrapped up. Such a sensitive soul, that Ke$ha.