Ke$ha's mother says she almost died from her eating disorder and doctors say it is a ''miracle'' she never passed away on stage. 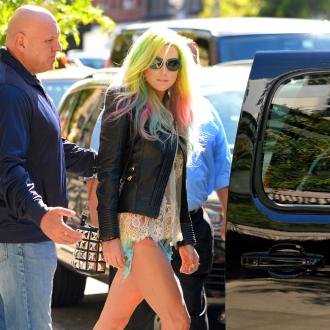 The 'Tik Tok' hitmaker checked into rehab earlier this month to seek help for anorexia and bulimia and her mother Pebe Sebert says her condition was so bad, doctors were amazed she was still managing to perform on stage.

Pebe said: ''I've watched my beautiful, self-confident, brilliant daughter be berated and ridiculed for her looks and weight to the point that she almost died.

''The doctors told me her blood pressure and sodium levels were so low, they'd never seen it that low except with someone who'd had a heart attack or stroke. They said it was a miracle she hadn't already dropped dead on stage.''

According to her mother - who has also checked into Timberline Knolls clinic alongside her daughter to deal with the stress of the situation - Ke$ha had battled body image issues since her school days, but things got worse when she signed with producer Dr. Luke and former manager David Sonenberg when she was just 18.

Pebe said: ''One time on a conference call, Sonenberg was screaming, 'You need to lose weight! I don't care what you do... Take drugs, not eat, stick your finger down your throat.'

''Ke$ha was just weeping. She drove around afterward thinking about killing herself.

''[Dr. Luke] has just always been very disrespectful about her weight. ''He'd say it in certain ways, like 'Why don't you try running?' She was doing everything and not getting thin fast enough, and that's when she first became bulimic.''

The 26-year-old singer is now focused on her recovery and isn't even worried about what the future holds for her career.

Her mother told People magazine: ''At this point, she doesn't care if she ever makes a record again. She just wants to be healthy and happy.''

Both Dr. Luke and David have denied Pebe's allegations.

Luke said in a statement: ''It is unfortunate that at a time Ke$ha is suffering immensely and trying to heal at a treatment centre, her mother is taking this approach with the media. I give Ke$ha my utmost support and well wishes for a quick return to health.''