Ke$ha has hinted her new single, 'Die Young', could feature Rihanna, in a video preview posted on the web. 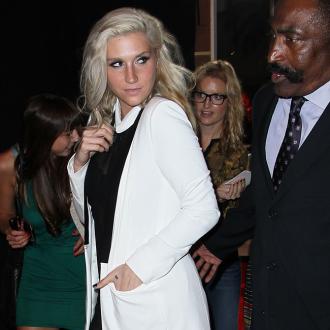 Ke$ha has hinted her new single could feature Rihanna.

The 'We R Who We R' hitmaker posted a video teaser for her track 'Die Young', which features a waffle house waitress holding a piece of paper with an 'R' written on it, which looks much like Rihanna's logo.

A caption then flashes on screen which reads: ''What's it all mean??? (sic)''

Also in the video, Ke$ha sings the song's chorus to a group of confused commuters on the Tokyo metro.

Another caption reads: ''Getting closer. get hyped. eternal boners (sic).''

Ke$ha - famed for her songs about getting drunk and partying - has previously said she plans to show her ''vulnerable'' side on her second, as-yet-untitled, album.

She said: ''I have a lot of growing and evolving to do. I'm definitely not a one-trick pony and I think people are starting to see that more and more.

''I have learned over the past three years of doing this that being vulnerable doesn't mean you're weak. I very much want to be seen as a strong woman, but I realise that vulnerability can also be a strength.

''So on my next record, you are going to hear probably a little more of that.''