Ke$ha wants to spank Harry Styles and would love to dive into a sexual conversation with him via text message. 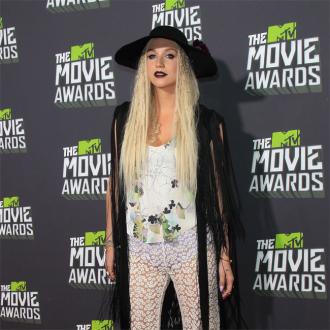 The 'Die Young' hitmaker - who openly admits she has a crush on the One Direction heartthrob - wouldn't mind tapping the singer's tight buttocks given the chance and would love to dive into a sexual conversation with him via text message.

When asked what she would say to him, she said: ''Text me any time. I could give you a little spank.''

However, the 26-year-old singer claims she's already got up close and personal with the hunk and even managed to have a sniff of his hair before giving his butt a quick squeeze.

Speaking to Closer magazine, she explained: ''He's a beautiful thing, isn't he? I won't eat him. I actually gave him an award at some show [Ke$ha presented One Direction with Best New Artist a the 2012 MTV VMAs], so I got a little squeeze.

''It [his hair] smells like roses and tropical lotions mixed with butterflies.''

The blonde beauty previously joked that she was ''saving'' her virginity for Harry and she was just waiting for her chance to rip his clothes off.

She said previously: ''I'm an angel. I'm a virgin. I'm a virgin, yup. I'm saving myself for Harry Styles ... I've met him briefly.