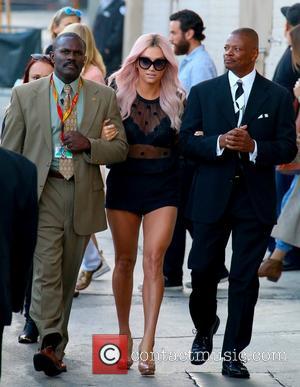 Picture: Kesha - Kesha is escorted as she arrives for a taping of the Jimmy Kimmel show - Los Angeles, California, United States - Tuesday 17th...

New U.S. talent show judges Kesha and Ludacris had a difference of opinion on a Tv show on Tuesday night (17Jun14) after the rapper insisted he didn't know the Tik Tok singer before they started working together.

The two stars were promoting Rising Star with fellow judge Brad Paisley and presenter Josh Groban on Jimmy Kimmel Live! when the talk show host asked them if they'd ever met before the programme.

Ludacris said, "No," prompting the singer to add, "You see, that's not true. We've played shows together."

The rap star then stated, "We've done shows together but we've never, like, formally met."

Kesha then attempted to jog Ludacris' memory further, adding, "My assistant made out with your tour manager!"

The rapper insisted the singer was lying, prompting Kesha to fire back, "I'm not lying."

Ludacris then used the disagreement to promote their new show, stating, "This is why you need to watch Rising Star live on television... I love it!"

He added, "At the end of the day, we both love tequila, so it doesn't really matter. I feel like I've known her all my life."