Kesha has surrounded herself with positive people and is now in a ''really good place.'' 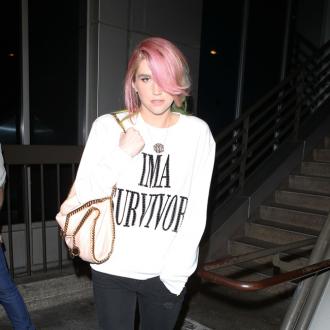 Kesha has surrounded herself with positive people.

The 'Tik Tok' hitmaker, who sought treatment in a Chicago rehab facility for eating disorders earlier this year, has ''eliminated'' all of the negative influences in her life and is now in a ''really good place.''

A source close to the 27-year-old star told PEOPLE.com: ''She has eliminated all of the negative people and influences in her life. She has surrounded herself with only supportive and loving friends and family.''

Another insider said that the blonde beauty has been ''lying low'' to focus on taking care of herself.

The friend added: ''Kesha is back to practicing self-love and is at peace with herself. She's found her inner strength and focus again.''

Kesha, who was formerly known as Ke$ha, spent two months in treatment after admitting she was suffering with bulimia and anorexia.

The 'Timber' singer, who is now setting up home in Los Angeles, previously thanked her fans for supporting her while she was in rehab.

She wrote on Twitter: ''I just wanted to say that this is really hard and necessary work. I'm grateful for all the love and support.