Kesha has revealed her fashion icon is wrestling legend the Ultimate Warrior, who was famous for his face paint and brightly coloured ring attire. 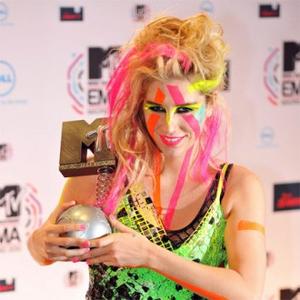 The 'Blow' singer takes her style cues from the former WWE star - whose in-ring attire consisted of a brightly painted face mask and tying multicoloured string around his arms and legs - who Kesha appeared to imitate when she appeared at the MTV European Music Awards last year.

She told Spin.com: "My favourite celebrity is Zach Galifianakis. And also that wrestler Ultimate Warrior; he's my new fashion icon."

The pop star also revealed she prefers buying vintage clothes and garments from charity shops, and her favourite item of clothing is a particular Guns N' Roses T-shirt she bought off someone who was wearing it at the time.

She explained: "My favourite store is Out of the Closet, which is a thrift store chain in California and Florida. It's used stuff; it's cheap; it's like a treasure chest. But also they do free HIV testing and give 96 cents of every dollar to care for people living with HIV and AIDS. But my favourite piece of clothing is an original vintage Guns N' Roses 'Appetite for Destruction' T-shirt.

"I bought it off a guy called Evil Ed who was wearing it at a dive bar in Nashville one night."