Pop Star Kesha Has Laughed Off Speculation She Has Gone Under The Knife To Boost The Size Of Her Butt By Joking About The Procedure Online. 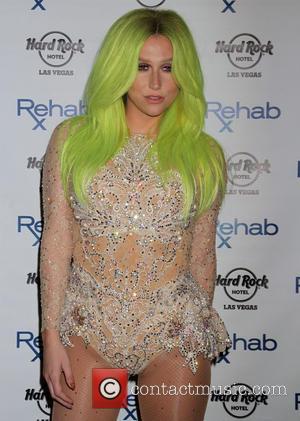 The Timber hitmaker reportedly sparked rumours about the surgery after appearing to display a curvier figure at the Los Angeles Price Concert on Sunday (16Jun15), and writers at one gossip blog decided to explore the claim by sharing "before and after" photos under the headline, "Did Kesha Get Butt Implants".

The singer spotted the article and decided to address the allegations herself by sharing a screen grab of the story on her Instagram.com page late on Monday (15Jun15), alongside the caption, "OMG (Oh my God) FAVORITE HEADLINE EVER!"

Brushing off the unfounded report, she added, "Haaaaaaaaaa yes I implanted rainbows in my a** (sic)."

Kesha has previously opened up about her body insecurities and her eating disorder battle, which led to a stint in rehab last year (14), saying, "I've had a lot of ups and downs. It's been quite a journey.

"There was a lot of not eating and I started to think being hungry to the point of feeling almost faint was a positive thing. The worse it got, the more positive feedback I was getting. Inside I was really unhappy, but outside, people were like, 'Wow, you look great'."