Kesha makes her assistant dress up in a ''penis outfit'' to cheer herself up when she is feeling sad. 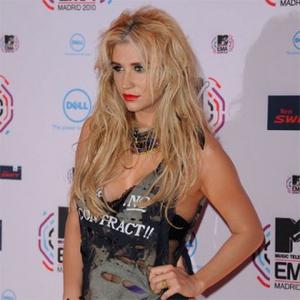 Kesha makes her assistant dress up in a "penis outfit".

The 'Tik Tok' hitmaker has a Juvenile sense of humour and when she's feeling down cheers herself up by getting her helper to dress up in an outfit used in her stage show.

"But who isn't amused by a giant, dancing penis? "Sometimes when I'm sad, I make my assistant put on the penis outfit and bounce around my house."

The 24-year-old singer - who is renowned for her outrageous on-stage antics and provocative lyrics - also admits being a "maneater".

She added: "Don't get me wrong: I do destroy men on a weekly basis. It's like a hobby. I'm like a praying mantis. They f**k me, and then I eat them."

Kesha has also said she grew up poor, but it didn't stop her living her life like a "f**king god".

She explained: "I've always lived as though I'm a f**king god. It never had to do with money though. I grew up with no money, but I never went without anything, it just made me creative and crafty. I used to just steal s**t or sneak into places, I would drive around Los Angeles in a Mercedes that some dude gave me.

"When you have the mentality that you're going to live a lavish lifestyle, not having money can't stop you."