Kesha says her boyfriend, Brad Ashenfelter, is a ''really sweet human being'' and she feels really lucky to have him in her life. 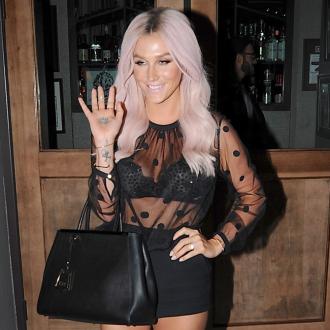 Kesha thinks her boyfriend is a ''really sweet human being.''

The 'Timber' hitmaker, who sought treatment in rehab for an eating disorder earlier this year, admits she feels very lucky to have New Jersey writer Brad Ashenfelter in her life and is ''really happy.''

The 27-year-old star said: ''He's really, a really sweet human being. I'm very happy to have him in my life ... That's way too much information for America to know. But, I'm really happy with my beard.''

The couple, who were introduced by her hairstylist, were first photographed together in April, but a source close to the singer revealed they have ''actually been together a long time'' and Brad ''did visit her during treatment, he's been alongside her through it all.''

Asked what first attracted her to her hairy beau, the blonde beauty also told 'On Air with Ryan Seacrest' today (20.06.14): ''I do [like dirty boys], not like physically covered in dirt, but I just like them to be beardy [with] long hair and look like a little homeless.

''I like guys who look like they don't groom themselves. I'm not into guys who are very high-maintenance. I don't want them to take longer to get ready than me.''