Kesha is writing new music and says she has created a whole new genre - ''c**k pop''. 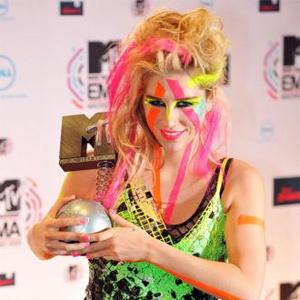 The 'Tik Tok' hitmaker has been working on songs for her second album and hailed her new material the ''dawn'' of ''c**k pop''.

Referring to collaborators Dr. Luke and Benny Blanco, she tweeted: ''wailing on an EPIC track with @thedoctorluke & @itsbennyblanco THIS is the dawn of a new genre of music: COCK POP!!! (sic)''

Kesha also promised her fans they will be able to ''party'' to the ''weird'' sounds of her new album.

She tweeted: ''Another sick session making crazy weird S**T for yall u party to (sic)''

Despite proclaiming fans will want to party to her new music, Kesha has previously said she planned to show her ''vulnerable'' side on her next album.

She said recently: ''I have a lot of growing and evolving to do. I'm definitely not a one-trick pony and I think people are starting to see that more and more.

''I think that my first record was very brash and very sassy and very unapologetic and irreverent. And I love that.

''But I have learned over the past three years of doing this that being vulnerable doesn't mean you're weak. I very much want to be seen as a strong woman, but I realise that vulnerability can also be a strength.

''So on my next record, you are going to hear probably a little more of that.''