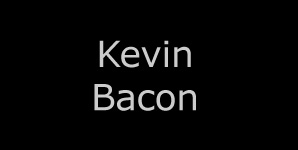 Kevin Bacon is cast as Richard Nixon's chief of staff, Lieutenant Colonel Jack Brennan in Frost/Nixon. A veteran of more than 50 films, Bacon's recent screen appearances include Mystic River and The Woodsman.

This is the second film you have made with Ron Howard. [The first was Apollo 13] What makes him such a special film maker?
He is the full package. He is a great storyteller, he is a great shooter. He has a real eye for casting, I think, and he keeps his eye on the prize. He is a very focused person and extremely friendly, nice and easy to work with.

What research did you need to do into Jack Brennan, the character that you play in Frost/Nixon?
Well one of the things that was great was that they had this amazing packet arrive at the house - it was a gigantic box of reading material, articles of the time and obviously the tapes themselves. I sought out Jack [Brennan] and took a trip up to his house at Rhode Island and we sat and looked out at the ocean and the bay and just talked. We hung out and exchanged emails. He is a great guy. I think that job is a little different from that of Frank Langella and Michael Sheen in that Frost and Nixon are both people of whom we have very clear images. They are real guys who are etched in our brains; whereas Jack, obviously he is a real person but it was not a question of me trying to do an imitation or physically represent him as much as it was to get into the essence of who he was.

Before you became involved in this film what had your views been on Richard Nixon?
Well I grew up in a very, very liberal, left wing kind of household, so obviously he was the bad guy. I was raised in a household that despised Nixon. My mother was a radical, left wing activist, so he [Nixon] was kind of the boogie man to us. But I think that any great story/film about a real person is going to humanise them, that's what these performances do and what Peter [Morgan] and Ron [Howard] have done because that's the truth. And the truth is that any person who has power still has blood flowing through their veins. That's what makes this so compelling, to see the other side of a character that we have almost turned into a caricature.

And had you been aware of David Frost and his place in television history?
Oh yeah, sure, of course! I had not watched the actual interviews at the time but I was aware of them and I was aware of his [Frost] world-wide popularity and that he was a larger than life character.

Do you think the viewer of Frost/Nixon will take on board the whole business of trial by television because this is where it started?
Yeah I think that this is where it started and it continues all the time in politics and in other situations where people say something, they put their foot in their mouth and they are somehow trapped; or they expose something on television and the power of the close-up is there. The thing about television is that with rewind/repeat, rewind/repeat, rewind/repeat, it makes things have a tremendous kind of resonance.

Had you seen the original Frost/Nixon stage play?
I had. I loved it. I thought Frank [Langella] and Michael [Sheen] were fantastic. They gave incredible performances and it was so great to see that they were going to take those and mould them into film performances. I was thrilled with it.

The film Frost/Nixon deals with a significant episode in recent American history. As an American how important is it to you to be part of this movie re-examination of history?
I think that there is that historical element, and there is also just great entertainment in the film. There are fantastic performances from the two leads and it is just a really entertaining ride. I sort of compare it to Rocky, it feels very much like a boxing movie and that was a smart move on the part of the film makers, to deliver a kind of thrill ride.

One of your great scenes in Frost/Nixon is when Brennan bursts into the TV interview room and disrupts the interview between Nixon and Frost because he is worried about how it is going. That sums up what kind of guy he is, someone who is prepared to do anything to protect a man whom he respects.
That is right. He is a Marine and that is what they were trained to do. He is trained to be the first one on the beach and the last one out and to throw himself in harm's way to protect his commander in chief. So he felt that was the right thing to do.

You have quite a few scenes with Frank Langella. What did you think of the way he inhabits the role of Richard Nixon?
It is fascinating, incredible. If you know Frank, he is so different from Nixon. When he came to the set, I never saw him as Frank, until the day that we wrapped. I only related to him as Nixon and it was really incredible.