Moviemaker Kevin Smith Has Spoken Out To Defend His Pal Johnny Depp In The Wake Of His Dog Smuggling Scandal, Insisting Threats To Jail The Star In Australia Are "Madness". 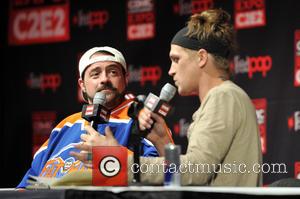 The actor fell foul of animal immigration procedures Down Under earlier this month (May15) when he took his dogs, Pistol and Boo, into the country without putting them through quarantine, and when officials found out, they threatened to kill the canines if they were not removed.

Depp, who is in Australia to shoot the next installment of the Pirates of the Caribbean franchise, flew the Yorkshire terriers out of the country but it has since emerged he could face a huge fine or even a jail sentence of up to ten years over the incident.

Now Smith, who worked with Depp in new comedy Yoga Hosers, has spoken up for the Hollywood star and slammed his treatment at the hands of Australian authorities.

He says, "It's f**king madness down there. I'm reading today he could face jail time or pay a very exorbitant fine. I understand laws are put in place for a reason but, heavens, it's getting a little too dramatic Down Under. First, we're going to have to put those dogs to death, now it's he might go to jail."