Khloé Kardashian works out 'every day'

Khloé Kardashian has revealed she works out ''every day'' and drinks litres of water to help her lose weight. 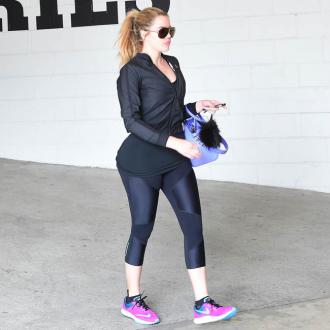 Khloé Kardashian works out ''every day''.

The 'Keeping Up With The Kardashians' star has been showing off her fantastic weight loss as of late and has revealed her way of ditching the pounds is exercising and eating right..

She said: ''I work out almost every day. I go to a trainer five days a week, and on the weekends, I do cardio and whatever I want to do.

''I kind of eat what I want, but in portion control, which I never knew before. It's really hard. You have to train your body to eat less. Your eyes are bigger than your stomach.''

The 30-year-old television personality also revealed she fills up with lots of water and is trying to encourage her younger half-sisters Kendall, 19, and Kylie Jenner, 17, to do the same.

She added: ''I had to train myself to drink more water. I drink like 5 litres of water a day.

''I yell at (Kylie) and Kendall to drink more water.''

And whilst she enjoys being a role model for her sisters, she doesn't want everyone to see her as someone to look up to because she's still ''evolving''.

She told PEOPLE magazine: ''I know what I can teach them, but it might not be for everybody, but it's for us. I want to impart the knowledge I have and they can take it. I think my job is to pass that on if it's in diet or whatever...

''I don't want the responsibility for being that for everybody because I'm still learning and even when I'm 60 I'm still going to be evolving.''