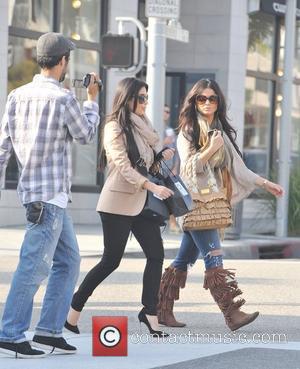 Picture: Kim Kardashian and a friend are seen shopping while out and about in Beverly Hills Los Angeles, California - 07.01.12

The final days of Kim Kardashian 's doomed marriage to Nba professional Kris Humphries aired during a double helping of Kourtney & Kim Take New York on Sunday evening (January 8, 2012). In one of the episodes, Kim, 31, concedes her relationship is fraught with problems and admits she cannot be herself around Humphries.
Of course, the marriage is now behind Kardashian after she filed for divorce just 72 days after their nuptials - though last night's episodes were filmed as the relationship first began to crumble. In the first of the two episodes, the couple began arguing after Kris jets off to Toronto with Kourtney's partner Scott Disick, leaving Kim behind. The New Jersey Nets star was filmed drinking shots and missing a series of texts from his wife - his apology later falls on deaf ears. In the second episode, Kim admits to her mother Kris Jenner that things simply aren't working out with Humphries and that the relationship is not what she expected it to be. She confides, "Married life just isn't what I thought it would be with him.I keep thinking something is off". Her motherly instincts kick in, and Kris tells Kim her feelings are not normal, recalling how she was "obsessed" with her late husband Rob for the first 10 years of their married life.
In a segment that featured Kim visiting Dubai for a promotional tour, she effectively signalled the end of her marriage to Kris by describing her time alone as a "huge relief" - this just weeks after their wedding.