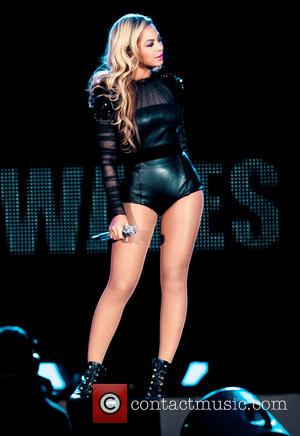 Kim Kardashian was unable to make her partner Kanye West's birthday bash in New York City this weekend after being told she could not fly ahead of the birth of her first child next month. The expectant mother was stuck in Los Angeles as Kanye rang in his 36th year at Caribbean-themed nightclub Ms Lily's, reports the Daily Mail.

Kim's thoughts were clearly still with her rapper boyfriend, tweeting, "Happy Birthday to my best friend, the love of my life, my soul!!!! I love you beyond words!" on Saturday as Kanye prepared to party with his NYC pals. She had apparently bought the Jeezus rapper a $750,000 Lamborghini for his birthday last year though decided to cut down on the lavish gifts this time around.

Kim may have been a little grumpy on Sunday morning after seeing photographs of a pretty stylish looking Beyonce turning up with husband Jay-Z to celebrate Kanye's birthday. The Halo singer opted for a midriff-baring black-and-white outfit with bowler hat and dark sunglasses.