Kim Kardashian was attacked by Hollywood prankster Vitalii Sediuk as she made her way to the Balmain show at Paris Fashion Week with her husband Kanye West earlier today (25.09.14) 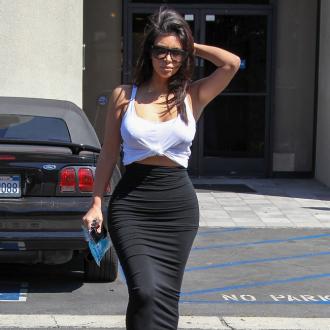 Kim Kardashian has been attacked at Paris Fashion Week.

The 'Keeping Up With The Kardashians' star was making her way to the Balmain SS15 show in the French capital with her husband, Kanye West, earlier today (25.09.14) when she was ambushed by renowned Hollywood prankster Vitalii Sediuk who attempted to knock her off her feet.

The Ukranian-born media personality, 25, is believed to have moved towards the reality TV star as she exited her car and tackled her causing her to fall backwards as the brunette beauty's mother, Kris Jenner, can be heard shouting, ''Stop it!''.

Kim, 33, was quickly grabbed by bodyguards, who shielded her from the attack and helped her make her way through the crowd into the show, according to a video obtained by gossip website TMZ.com.

The prank is Vitalii's first following his claims in July he had entered into ''retirement'' and apologised to his celebrity victims.

The former journalist - who also scaled a barrier at the 'Maleficent' premiere to confront Brad Pitt and has previously accosted stars including Bradley Cooper, Leonardo Dicaprio and Will Smith at red carpet events - insisted he had changed his ways and was moving to London to launch a modelling career.

He said at the time: ''Basically, I'm changing my life. I would like to thank Hollywood for having me this two years and a half. It was an experience that taught me a lot in life. Most importantly, I would like to say sorry for celebrities that had to deal with my stunts and thank them for being tolerant to me all this time.''

TMZ.com also reports that reps for Vitalii have been in contact to confirm he is taking credit for the incident.