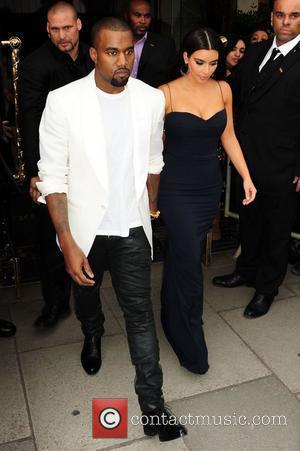 Kim Kardashian launched her latest fragrance 'True Reflection' at the Debenhams department store on London's Oxford Street on Thursday (May 17, 2012). Fans of the reality star turned out in their droves to catch a glimpse of her, while shoppers on the capital's most famous street also stopped by to see what all of the fuss was about, reports the UK's Sun newspaper.
Thankfully, there was no repeat of the drama that ensued the last time Kardashian made a large public appearance - getting flour-bombed during a party in Hollywood. In London, Kardashian sported a clingy red lace frock and posed for the huge group of photographers that had gathered. The previous evening, Kim had dined at the plush 'Zuma' restaurant in Knightsbridge with her boyfriend Kanye West, his fellow 'Watch the Throne' rapper Jay Z, her brother Rob Kardashian and his girlfriend Rita Ora. Earlier this week, Kim had confirmed that her new relationship with Kanye will form part of the new series of 'Keeping up with the Kardashians', saying, "If we are having dinner and Kanye does show up, I'm sure we're not going to go, 'Stop the cameras!' I want to show my life".
Kim will no doubt be cheering on her boyfriend and Jay Z as 'Watch the Throne' perform three concerts at London's O2 Arena starting on Friday (May 18, 2012).