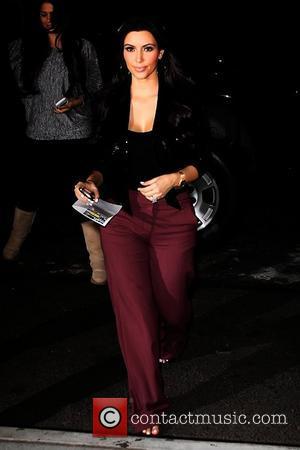 Picture: Kim Kardashian smiling on her way to visit her friend Jonathan Cheban despite having an alleged fight with her new husband at their hotel. She...

Kim Kardashian saw in her 31st birthday in fine style on Friday (October 21st,) the reality star was serenaded by Pink at an intimate dinner in New York restaurant The Derby.

Pink, who turned 31 herself last month, sang a cover of Roberta Flack's 'KILLING ME SOFTLY' at the party which saw Kardashian and husband Kris Humphries joined by Kardashian sisters KHLOE and KOURTNEY as well as the latter's husband Scott Disick. Pink wasn't the only one singing either as Kim's good friend LA LA ANTHONY turned up to give a rendition of Stevie Wonder's 'Happy Birthday.' The celebrations continued last night as the socialite headed to Sin City to party at the Marquee night club, reports E! Online.

The best present for Kardashian however was the news that she is to appear in the new Tyler Perry film 'The Marriage Counselor;' she took to Twitter to reveal the information, enthusiastically tweeting "Big news!! I'm co-starring in Tyler Perry's new movie!" The film focuses on, unsurprisingly, a marriage counsellor who finds their own marriage falling apart when she and her husband are joined at home by her husband's parents. Kim plays the role of a co-worker who takes the as-yet unannounced lead character away for a makeover in New York. The film is expected to appear next year.