Mum-to-be Kim Kardashian Has Hired A Nutritionist To Help Her Maintain A Healthy Diet In A Bid To Avoid The Preeclampsia Problems She Suffered While Pregnant With Her First Child. 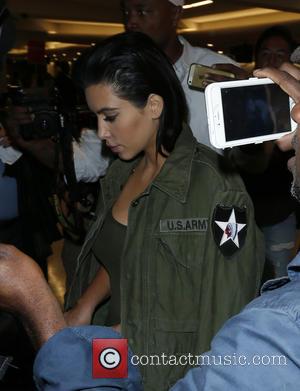 The reality TV star was diagnosed with the rare high blood pressure disorder when she was expecting her daughter North in 2013, and the condition left her struggling with headaches, vision issues and swelling.

Now Kanye West's wife is taking action to try and prevent any health complications with the couple's second baby by recruiting a food expert to come up with weekly meal plans to keep her sodium intake at a minimum and increase the amount of water in her diet.

Kardashian has already made a big change in her pregnancy eating habits after cutting out the donuts she gorged on every morning while expecting daughter North, but she recently admitted she was struggling to keep any food down due to severe nausea.

She said, "To be honest, I've had really bad morning sickness, day sickness, night sickness - I can barely get out of bed.

"It's a very different type of pregnancy from my first one, but I'm so grateful to be pregnant when we didn't even think it was going to happen for us, I don't care how sick I am."

The beauty previously documented her fertility struggles on her reality show Keeping Up with the Kardashians.

She is reportedly due to give birth at the end of the year (Dec15).